The host of The Daily Show said he was at the came and watched things unfold. He mentioned that the winner 20-year-old Naomi Osaka played her very best.

Addressing Serena Williams outburst, Trevor said Serena had every right to be angry because she was being punished for what her coach did. He said her coach was coaching her but Serena was on the other side of the court and couldn’t see him. So, when the umpire punished her for what her coach did, she was naturally upset. Trevor went on to point out that getting angry on the court is a normal thing that all players do, especially male players, but Serena was penalized and is being called out for it and it all boils down to sexism. 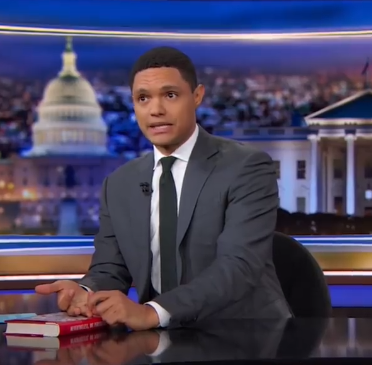 I think Serena has a good point.

He went on to give examples of other times in sports where men had displayed emotions but it wasn’t interpreted or reported the way Serena’s outburst is being reported.

Most tennis players came out and said, ‘hey look. What she did, all the guys do; not just being coached, but also talking trash to the ref, erm to the umpire’. They were like, ‘yeah, we all do that. Only difference is we don’t get penalized the same way’.

And that’s the conversation that’s come out now. It’s like, even in tennis, even at that level of a sports, you still see a discrepancy with how a man and a woman are treated in the same environment, in the same work environment.

But you see constantly that we don’t live in a world where everyone is treated the same. And now, I’m not saying that Serena shouldn’t be punished, I’m saying that the other way round, I’m saying like, now the focus is on the guys. It’s like why aren’t they being punished… Why aren’t they being called out on these things? Because it’s gotta be equal one way or the other. Either everyone fights or everyone gets punished.

Watch the video below.

5 Myths About Getting Flat Stomach